I am a runner. I say that with confidence and feeling like a fraud. I say it with pride and with annoyance. I hate running with a passion. And yet, so much of my time is occupied by running. In four weeks, I will run my first (and hopefully, only) full marathon. And then I hope to be done with this running bug. Let me explain.

When I was a kid in gym class, we had to run a mile as part of our physical fitness test each year. I would run the short part of the track and walk the long and it would usually take me around twelve minutes. I hated running. Somehow, I joined the track team. I was a slow runner, but on the relay team, I didn't have to run far. Turns out, I was still slow. And I still hated running. After high school, I never ran again. I didn't have to and I didn't want to and that was that.

Sometime in my twenties, my sister started running and tried to get me to run with her. I was a cigarette smoker at the time so running even a quarter of a mile was brutal. Even after changing my lifestyle, the weight I gained made running excruciating on my knees and shins. The first 5K I ever ran took me well over 40 minutes and it was hard. But for some awful reason, I kept running.

I started to like the feeling of setting goals and crushing them. Where in other areas of my life, meeting goals did not come as easily, running came with an achievable plan. Follow the plan, achieve your goals. For example, in early 2014, I decided to run a half marathon. I downloaded a running plan from the internet, hung it on my fridge, and woke up early three days each week to go for a run. I wore the wrong clothes and I had no idea what I was supposed to be doing, but I got up and I went out and I ran...in the cold, in the rain, and in the snow. I posted about my adventures on Facebook and "real runners" gave me pointers and tips. In my head, I wasn't a runner. I was just someone who wanted to complete this goal. In May of that same year, I ran my first half marathon. I ran the entire thing (no walking) and it took me 2 hours, 43 minutes, and some seconds. It was about a 12:15 mile. 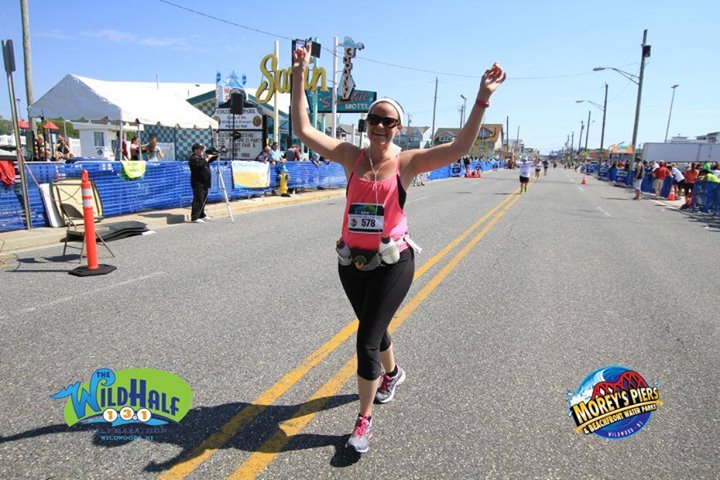 I started and stopped countless times over the next 4 years because I wasn't really a runner. A race would come up--a 5K or a 10-miler--and I would start all over again with my training. Never getting any faster, never reading running magazines or learning anything new. Just lace up your sneakers and go for a run type of running. Running allowed me to eat whatever I wanted and I impressed my non-running friends with my increased mileage, but I still hated every step.

Why do I hate running? It doesn't feel good in my body. If it's not my shin splints, then it's my knees. If not my knees, then it's my hips or my toes or my low back. I am a yoga instructor, and I love yoga. Yoga doesn't cause me any pain, but I get stronger every time I practice. I don't need to compete with anyone and my yoga teachers taught me that I can trust my body. If my body says I've done too much, I can respect my body and rest. What other sport tells you that? In my life, I've tried softball, basketball, field hockey, tennis, gymnastics, swimming, volleyball, crossfit and running. The common phrases I've heard in these sports are: no pain no gain; in order to run faster, you have to run faster; walking in a race doesn't count as running, if you don't run the entire thing, you didn't really run the race; don't give up, push through the pain and discomfort; you can do anything you want to do, it's mind over matter; etc. etc. etc. All of these sentiments are in direct opposition to what yoga has taught me. All of these ideas tell me to not trust or listen to my body; rather, I should allow what I want to do (or what other people think I should be doing) to rule over my body. Is it really any surprise that injury is prevalent in so many sports? According to a study published in the National Library of Medicine, running has a higher risk of injury than most other individual sports.

Last year, I ran the Philadelphia Blue Cross Broad Street Run (10 miles) for the second time. I decided to employ the Galloway method, where you use run/walk intervals. I ran seven minutes and walked one. I finished the race seven minutes faster than the previous year when I had run the whole thing. I decided to keep running. I decided to train for a marathon. I was feeling strong and healthy, and I loved the "high" I got from meeting my goals. So I set the goal and told everyone about it, and this time, I hired a running coach to help me through it. I ran the Broad Street Run with an average time of 11:15/mile, but my running coach gave me permission to run slow in training, so I did. I ran a half marathon in the fall and my time was two hours, 43 minutes and some seconds. In other words, I finished it in exactly the same amount of time as I did four years prior (give or take a few seconds), except rather than running the whole thing, I walked two minutes for every seven I ran. I was back to a 12:15/mile, not so unlike when I was a pre-teen. 20+ years later and I hadn't gotten any faster.

During the course of my training this winter, I have spent so much money on running. Between the sneakers, race entries, special moisture-wicking clothes, $30 socks, running sunglasses, reflective gear, energy gels, deep-tissue massages, etc., I am going for broke. Gone are the days when I just laced up my sneakers and went out for a run. I have also spent so much time running. I wake up really early to teach yoga, so my runs are usually in the middle of the day or in the evening. And my long runs take 3-4 hours on my only day off each week. Not including the hour or so it takes me to get out the door. There's a process I follow to prepare for long runs in the winter. I need to fill up my water bottles with electrolytes, take my workout supplements, put on my compression sleeves for my legs, map out my run in advance since I don't have a fancy watch to accurately track it, and then of course, pee three times.

I joined the local running club for motivation, but so far, it has made me feel inadequate. The other members of the club are "real runners". They have the pricey running gear, the advanced technology, they can talk and run at the same time, they hardly break a sweat, they are always miles ahead of me, they don't stop to walk, and they seem to actually enjoy running! Every time I open my mouth to talk, I feel like I'm saying something negative or complaining about running. I've tried to tell myself and them that I love running (fake it until you make it, right?) but when I get really honest with myself, I don't love it. I hate it.

So who am I running for anyway? Why am I torturing myself 4 days per week? I like swimming. Maybe I could resume swimming. I like lifting weights. Maybe I could spend more time doing that. I love yoga. I would love to take a few more classes each week. And maybe there's a sport out there that I haven't tried yet that I could engage in and enjoy. I wanted to be a part of the running community. I wanted to love it. But I don't. In the past, when I've tried other activities, such as Zumba or Body Pump, and I went right when everyone went left, I would give it a few tries and then I would be done. I had tried and it wasn't for me. No shame. With running, I've tried my ENTIRE LIFE and it's not for me and I won't let myself off the hook. Just talking about "giving up" on running makes me feel like a failure, a fraud, unworthy and not enough. Should any sport that's supposed to make you feel good make you feel like that?

The past few times I've ran, I've cried afterwards. Sobbed, to be honest. I can do it, but I don't want to anymore.

I've decided that I will put all of my positive energy into running this marathon on February 10th. I will do it and it will be my last hurrah as a "runner". And then I will be free from this ridiculous cage I've locked myself into. Thank you to everyone who has encouraged me along the way. I really appreciate the support I've received. But running is just not for me. And that's okay.

What is Mindful Healing?

10 Reasons to Do Yoga Teacher Training